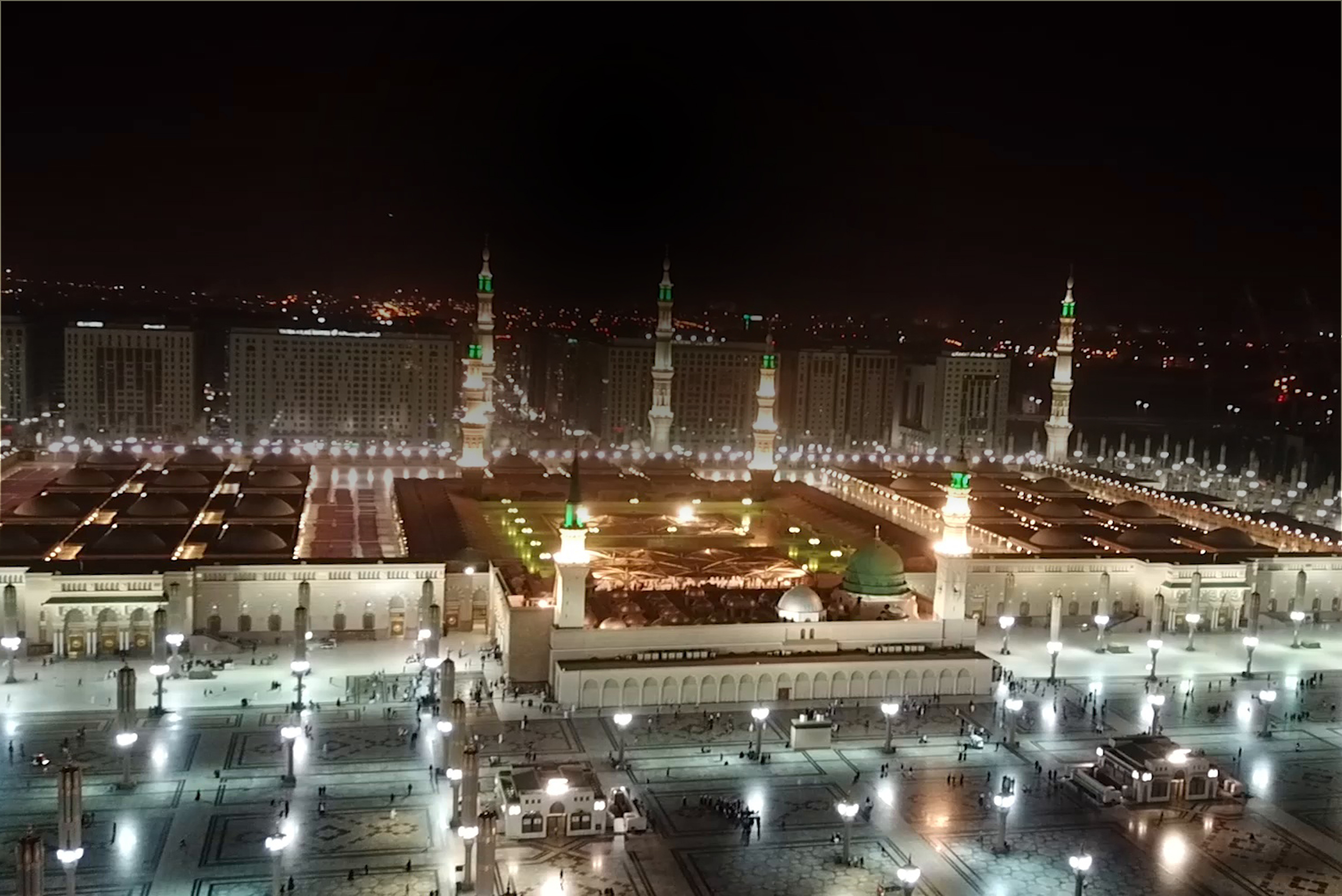 Awliyaa, Hadith, Knowledge, Tassawuf, The Noble Prophet ﷺ 1 April 2021 5Comments
The Beauty of the Beloved of Allah ﷺ
Sayyiduna Abu Hurayra radiAllahu anhu narrates: ‘I did not see anything more beautiful the (Beloved) Messenger of Allah ﷺ’
Know, Sayyiduna Abu Hurayra radiAllahu anhu did not say ‘I did not see any human or any man (more beautiful than Him ﷺ) for such a phrase allows other subjects to be compared to His ﷺ incomparable beauty; for His ﷺ beauty is greater than all creation; he radiAllahu anhu further states, The (Beloved) Prophet’s ﷺ luminous face was such, it seemed as if the full moon had (taken refuge) in His ﷺ blessed face.
The people of knowledge have mentioned the difference between saba’hat* and mala’hat*. Saba’hat was given to Prophet Yusuf alayhi salaam and Mala’hat is (one of the) attributes of  our Master, the Beloved Prophet Muhammad ﷺ. The Noble Prophet ﷺ said:
انا املح و اخي اصبح
Within me is mala’hat and my brother (Sayyiduna Yusuf alayhi salaam) has been given saba’hat.
-Excerpt from Madarij an Nabuwwah, Sayyiduna Shah Abdul Haq Muhaddith al Dehlvi radiAllahu anhu
*Saba’hat means a type of beauty that a person is unable to look at, as when the women of egypt looked upon Sayyiduna Yusuf alayhi salaam they cut their fingers instead of the lemons as mentioned in the Qur’an:
فَلَمَّا سَمِعَتْ بِمَكْرِهِنَّ أَرْسَلَتْ إِلَيْهِنَّ وَأَعْتَدَتْ لَهُنَّ مُتَّكَأً وَآتَتْ كُلَّ وَاحِدَةٍ مِّنْهُنَّ سِكِّينًا وَقَالَتِ اخْرُجْ عَلَيْهِنَّ ۖ فَلَمَّا رَأَيْنَهُ أَكْبَرْنَهُ وَقَطَّعْنَ أَيْدِيَهُنَّ وَقُلْنَ حَاشَ لِلَّهِ مَا هَٰذَا بَشَرًا إِنْ هَٰذَا إِلَّا مَلَكٌ كَرِيمٌ
So when she heard of their scheming, she sent for them and prepared for them a banquet and gave each one of them a knife and said [to Joseph], “Come out before them.” And when they saw him, they greatly admired him and cut their hands and said, “Perfect is Allah! This is not a man; this is none but a noble angel.” -Qur’an 12:31
*Mala’hat refers to that beauty which one who witnesses it, is mesmerised by it and is awestruck as is mentioned by Sayyiduna Ali b. Abi Talib alayhimus salaam:
مَنْ رَآهُ بَدِيهَةً هَابَهُ،
‘If someone saw Him ﷺ unexpectedly, he was awestruck by Him ﷺ‘ as mentioned in the Sham’ail al Muhammadiyya by Imam Tirmidhi radiAllahu anhu.
Allah Ta’ala and His Beloved Messenger ﷺ know best.
Tags: alayhis, Hadith, Imam Ali, Prophet's beauty, salaam, Sayyiduna Ali, Shamail, Shamail e Muhammadiyya, Shamail e Tirmidhi, ﷺ

The intercession of The Noble Prophet ﷺ

The beauty of the Beloved of Allah ﷺ

Call upon Allah with the Greatest Name

Recite this and an Angel will Protect you all night

The Pillars of Masjid al-Nabawi ﷺ